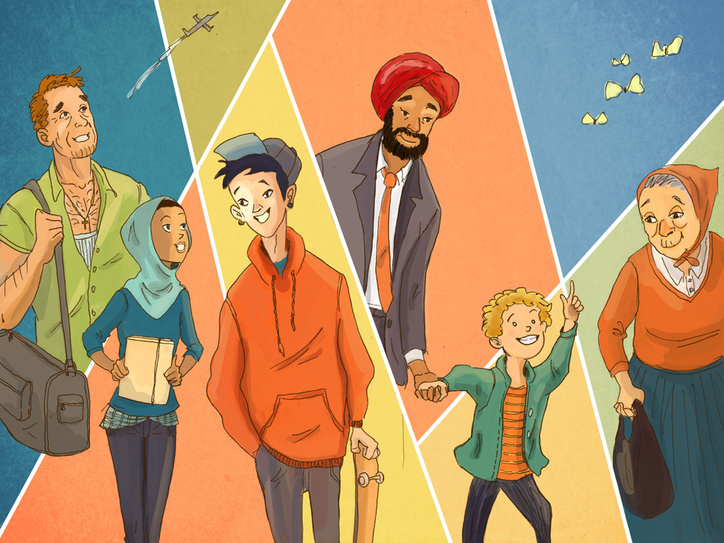 Within the context of the project various comics dealing with socially and politically relevant topics such as migration, flight, asylum, cultural diversity and intercultural life have been created, published and distributed by various channels.

One of the first project tasks was to conduct research, to talk to people and to collect stories. To assure the authenticity of the narrations, the comics are based on real experiences. Therefore, numerous interviews have been conducted. The aim was to talk to people of different ethical origin, various social backgrounds and views, who had to flee from their country for different reasons as well as to people without these experiences. The comic stories are inspired by those personal experiences.

The comics have been distributed via various media channels and some are available in print version as well. In this way, we were able to maximize the outreach of the project. The printed material has been distributed across Austria and Germany in schools, associations, youth centers, libraries, medical practices, coffeehouses, hair dressers and other places. In this way, the comics have been made accessible to a broad range of people. Above that, teachers and workshop leaders use the comics and our didactical suggestions for their lessons. Due to the broad dissemination as well as the versatile possibilities to work with the comics, Blickwinkel has reached a wide range of people already and gave them access to information on the topics mentioned above.

Altogether, 30.000 printed folders have been and are being distributed. Additionally, cooperations with various associations have been built up, e.g. culture unlimited, zusammen leben e.V., WienXtra, teach4austria, projectXchange, Rotes Kreuz, Amnesty International and many more who already work with Blickwinkel material in education or promote it in other ways.

One of the most important aims of the project was to take the personal stories to as many people as possible. Apart from the active distribution of the printed issues, expanding our support network and using various media channels to promote Blickwinkel and its stories, was of main importance to achieve our goals. In October 2016 we were invited for an interview by Radio Klassik in Vienna. The contribution will be on air in February 2017 and will once again extend the proportion of the project. As Radio Klassik frequently reports on social and creative topics and initiatives, the listeners constitute another group of potential multipliers.

Amnesty International Austria promotes Blickwinkel comics to be part of human rights education in schools and other workshops. Part of the cooperation with Amnesty International was a comic workshop we contributed within their two-days-conference on human rights Gemeinsam Grenzen überwinden (overcoming boundaries together). Many activists who joined the conference have already started to support our project in different ways.

Another important possibility to increase the level of publicity was the participation in the exhibition Transition which was opened in autumn 2016 in the Sozialamt in Graz and will be shown in various places across Styria until spring 2017. As the title suggests the exhibition deals with social transitions in the context of flight and migration. According to the Blickwinkel philosophy, our contribution is based on personal stories of refugees. The fact that the exhibition is also shown in rural areas helps to address an even broader sector of the population.

Basically, the implementation of the project was very successful and the initiators’ expectations, concerning the distribution of the comics and the positive feedback, have even been surpassed. Because of additional activities like exhibitions, workshops etc. the timeline has been slightly rescheduled and the publication of the collective issue delayed. For the accomplishment of the goals, especially concerning quality of work and intense publicity, the effects of the prolonging of the project have been overall positive.

Due to the great success of the first project period 2016, the initiators decided to continue the project in 2017. An association will be founded to accomplish funding more easily.

Beside the production of further comic stories and a steady enlargement of the networks, the initiators will offer workshops themselves and will cooperate with institutions like WienXtra Schulevents, ARGE Jugend gegen Gewalt und Rassismus in Graz and SOS Menschenrechte in Linz.

Moreover, we aim at publishing the comics in other languages to enlarge the circulation beyond Austria and Germany.

Furthermore, a research project in a refugee camp in Greece in spring 2017 is planned to collect material for further stories.

Another plan for 2017 is a further promotion of the project idea and the Blickwinkel comics in diverse media. For the release of the collective issue a special launch event is planned to which supporters of Blickwinkel and also representatives of the media will be invited. The ORF will report on the project in their transmission Heimat, fremde Heimat.

The positive feedback and the reaction of numerous supporters made it clear to us that we wanted to prolong the project. There are many exciting stories waiting to be told, depicted and heard.

The initiative Blickwinkel – Mut zur Perspektive encourages a positive view of cultural diversity with the means of comics.

Migration is of overall concern, not just in Austria but also across Europe and the whole globe. Naturally migration brings along challenges but also opportunities. Cultural exchange provokes new food-for-thought and perspectives; people of different origin can learn from each other and profit. Not least is migration important from an economical point of view in a more and more aging society. Cultural exchange and inclusion will only work out if people are tolerant and open-minded. Blickwinkel exactly starts here: personal stories of migrants aim at the empathy for the fate of people.

The comics motivate a lot of readers to engage themselves in topics like flight, asylum, migration and prejudices in a new way and to look for information beyond the mass media. Active opinion forming has become more important than ever in times of uncontrolled and unquestioned information especially in the social media. The stories of the comics make it clear that behind the numbers and facts in the media there are people and their various histories. Stories with an authentic background make it easier for the readers to identify with the characters. The Blickwinkel comics encourage the readers to question the wide-spread opinions, distinguish facts from ideas and reflect on the information they receive.

Through the medium comic inhibitions to engage in difficult topics like flight and asylum have been lowered. Complex information and the emotions and feelings of the characters are more easily accessible by the means of pictures.

In this way, it was possible to address a wide range of society. The comics were distributed in all federal provinces in Austria and also in large parts of Germany, and thus reached also people who usually don’t look for background information for present socio-political relevant topics.

With the collective issue, which also contains pedagogical material, it is possible to work with the young generation. Thus, unprejudiced and curious young people are being motivated to think about the history of their neighbors, colleagues and friends.

In nearly all cases the reactions to the project were very positive. Often we heard that our new and in many respects singular attempt was definitely the right approach to reach the aim of our project. Many people have been motivated to support our initiative because they saw our project as a missing link between the scientific discussion and media coverage of these topics and the general interest of society.

The comics were especially well received by children, adolescents and students. Naturally, a medium which is consumed by them mostly beyond their tuition is accepted with interest and motivation. This is what we experienced also with the Blickwinkel-comic stories. We were strengthened in our conviction that the medium comic reduces the inhibition to engage in complex topics.

The reactions of multipliers have also been overall positive. This was enormously important to achieve the aim of the project. Many actors in the field of education as well as socially engaged private persons are working with the comics and supporting the distribution. Therefore, we successfully managed to spread the stories in Austria but also in wide parts of Germany and even other European countries. Representatives of the media, who function as important multipliers, have also responded in a quite positive way.

We did not experience any negative criticism but of course the interest of some people was lower than that of others. Some could be easily convinced by the positive socio-political aspects of the initiative, with others it was more difficult and others might have forgotten the project soon after they had heard of it. Especially at the beginning when we only had little comic material to show, it was not always easy to convince because the form of the project was relatively new and in some ways abstract. The motivation to convince the doubters was even higher after having received a lot of positive feedback already.

The costs for the print were the greater part of the expenses. From the beginning, it was quite important for us to reach as many people as possible with the stories. It was clear that the costs of the comics would be an obstacle. Therefore, it was important to cover the expenses for printing by the donations and thus be able to offer the comics for free. Four different issues were projected for the first run of the project: Three shorter comics with 10.000 copies each and a longer collective edition with a circulation of 1.000 copies. Two comics have already been published in print form, the final edition and the collective edition will be published at the beginning of 2017.

Money was spent for the distribution like postage and shipping, fares for networking meetings or the participation in relevant meetings, events and interviews. Expenses also arose for research and distribution of the material.

Additional expenses were spent on the pedagogical and didactic preparation of the material.

Money for publicity was mostly spent on website domains, office supplies as well as diverse material for publicity.

Minor costs were the fares for the meetings of the project team.

In fact, the actual expenses compared to the original budget plan have slightly shifted. The costs of printing were higher than originally planned; this was caused by the increased amount of pages as well as a better quality of print. Nevertheless, the costs could be kept in balance because we were able to reduce costs in other areas.

For a detailed documentation of the money spent see the document Finance Report.